Mr. Overon in the media 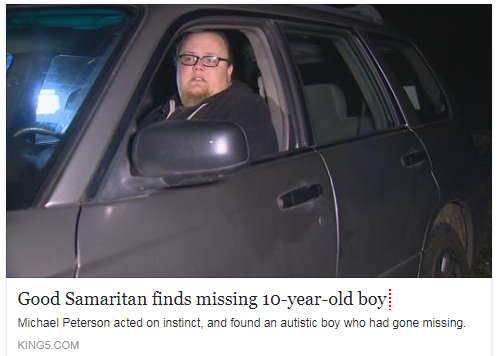 An unlikely rescuer helped bring an end to a scary situation in Jefferson County.
A 10-year-old boy with autism disappeared on Marrowstone Island on Thursday.
Michael Peterson of Port Hadlock found out about it through a Facebook post.
"There was this nagging voice inside of me," said Peterson. "I grabbed a flashlight, hopped in the car, said a little prayer, and headed out this way."
Peterson had never met the boy before, but he wanted to help look for him. He says he acted on instinct, and just after 10:30 p.m. Thursday, he went to Indian Island Park.
"My first thought was to try the beach," he said. "I decided to come down here, and that's when I started calling out his name. I thought I heard a faint, 'I am over here.'"
Peterson says he kept moving closer while calling out to the boy.
Peterson says he soon heard a voice crying, "Please hurry. I'm cold and I'm scared and I can't move my legs."
Peterson discovered the boy 500 yards from him, stuck in the tidal flats. He called 911. Then he waved down a firefighter who was driving by.
"I was just blessed that I was the one who found him, and happy that the story ended the way that it did instead of a more tragic way," said Peterson.
Bill Beasley with Jefferson County Fire and Rescue confirms Peterson's story. He checked with dispatchers and the 10-year-old child, and said it does appear that Peterson's actions helped solve the missing persons case.
Firefighters reached the 10-year-old just after midnight. He was cold and wet but uninjured.
© 2017 KING-TV
https://www.king5.com/article/news/local/good-samaritan-finds-missing-10-year-old-boy/281-496287487

MARROWSTONE ISLAND — After an exhaustive search, a 10-year-old island resident was found stuck in the mud on a beach on Indian Island hours after he had wandered away from his home.The boy, who is autistic, was found over 3 miles from his home at 11:55 p.m., more than six hours after he had been reported missing by his father.
Searches initially focused on the area near Griffiths Point Road, which is near his home. The Jefferson County Sheriff’s Office, East Jefferson Fire and Rescue, Engine 91 from Indian Island and search and rescue teams from Jefferson, Clallam and Mason counties all responded to assist, as did the Kitsap Sheriff’s Department.
The U.S. Coast Guard also provided helicopter assistance to search the area near Griffiths Point Road and the beaches around the island.
The boy was discovered by a Port Hadlock man, Michael Peterson, several miles away from the initial search area.
News organizations had put out word about the missing boy on social media, and Peterson, speaking with the Peninsula Daily News, said he stumbled across a message on his Facebook feed about the missing boy and felt compelled to go out and look for him. He said it was an unusual choice for him, as he does not often leave his home.
“Something in me said ‘you should go out and look for him’,” Peterson said. “So I got in my car, said a little prayer and drove all the way out to Marrowstone.”
Peterson discovered the boy as he drove around calling out his name. Eventually, Peterson heard a voice call back, telling him he was trapped in some mud and could not get out. He then called 9-1-1 and explained his location, near state Highway 116 where the land masses of Marrowstone and Indian Island meet.
“On either side there are these tidal mud flats,” said Bill Beezley, East Jefferson Fire and Rescue spokesman. “So at high tide there’s a little bit of water. He crossed that road and he got all the way across the land mass to the Indian Island section.”
Search and rescue teams then made their way over to the beach where the boy was found cold and wet, but otherwise unharmed.
“I’m just glad everything worked out the way it did,” Peterson said.
https://www.peninsuladailynews.com/news/missing-marrowstone-island-child-found/ 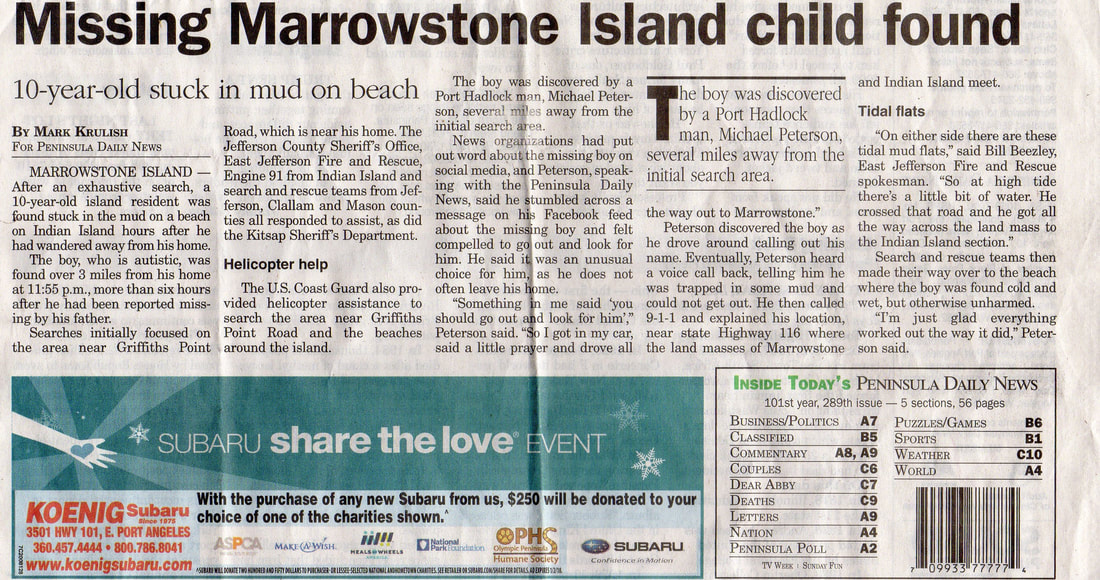