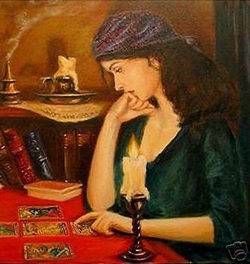 Few things are as misunderstood as Tarot Cards. For all of the negative
associations surrounding
divination and Tarot Cards in particular, there is little direct connection between these negative
ideas and the reality of working with the cards. Dispelling a few myths may prove useful to our
examination of the validity of Tarot.

The first, and biggest myth is that they are anti-Christian or "evil." People who believe this tend
to believe the cards "work" because they are infused with some sort of dark power. This myth,
like all myths, contains a tiny grain of what used to be truth that has been twisted beyond
recognition. In reality, it was the Christian church that in the middle ages stamped out Paganism,
its chief competitor, by demonizing it and all things associated with it. People were told that their
old horned fertility god (think of Pan) was the most evil being in all of creation, and the Devil
was invented. Christianity is certainly anti-Pagan, and to the extent that Tarot cards are perceived
as Pagan, many Christians feel compelled to condemn or ostracize Tarot cards and Tarot card
readers without really understanding why.

Tarot Card readers, on the other hand, have no such beef with Christianity. Most of us don't
consider Tarot to be an element of our religion in the first place (though we may consider it of
spiritual value) and can't understand what all the drama is about. Some confusion often arises
due to the inclusion of a Death card and a Devil card, two hot button items when seen through a
religious lens. For now, it is enough to note that the Tarot interpretations of these symbols are not
the interpretations that many people are used to.

Another powerful myth is that Tarot is some kind of shifty scam, a Three Card Monty of sorts
that by definition is a con game designed to use fraud to get people's money. Sadly,
there are dishonest hustlers in every profession; doctors, lawyers, contractors, florists, you name
it, there are unqualified people posing as qualified professionals charging money for substandard
service or services that are never delivered in every industry and field. Tarot is no different, but is
no more susceptible to infiltration by dishonest individuals than any other profession or service
area. The main argument, it appears, is that Tarot readers may present themselves as something
they are not, "psychic," or "fortune tellers," that a skeptic may decide simply can not be "true."
At the heart of this issue is the difference between what being psychic means to different people
who either claim it or perceive the claims of others. It all depends on your answer to the question,
"What does it mean to be psychic?"

Virtually no one who has any knowledge or experience with Tarot Cards believes that the cards
themselves are magic. There is a superstition out there that no one should touch your cards
except for yourself, and naturally collectors who spend hundreds of dollars on individual decks
are going to hesitate before allowing anyone to handle them (especially since people are inclined
to begin shuffling cards once they hold them!). Some people believe that items can pick up and
retain energy from different people or situations, and this applies to their Tarot decks as much as
anything else. In my experience, most people who harbor any true anxiety about others touching
their cards are new to the idea of Tarot, and haven't studied the cards or taken the time to
understand what Tarot is about. The example of a person who knows nothing about cars, kicking
the tires on the showroom floor comes to mind. Tarot cards aren't magic. They are cardboard.

The truth is, some are. I've been surprised, however, by how many people still think that witches
have some sort of religious connection to "Satan." That isn't true either. Regardless, there is no
official religious affiliation for Tarot. Some Tarot readers are Jewish or Christian; others are
something else, or nothing at all. In fact, there are many Tarot decks out there that are geared
toward one religion or another, combining the symbolism and images of a particular religious
tradition with the traditional meanings of Tarot to create something that illuminates both
traditions.

Myth #5 - You have to be psychic to read Tarot Cards

Absolutely not! Anyone can read Tarot cards, it's just a matter of memorizing some basic
meanings and getting used to the different cards in the deck. Of course, some of us believe that
everyone is psychic, but to examine such a notion, we would have to decide what it actually
means to be psychic. Suffice it to say, for now, that for some people, Tarot feels as though it
serves as a psychic tool.

In conclusion, we can understand what Tarot Cards are much better if we first understand what
they are not. They are neither evil nor a scam, they are not magic in and of themselves and you
do not have to be a witch or a card carrying "psychic" to read them. If we can establish that
much, we are free to examine the beauty and power of this amazing tool.
Powered by